Ecological data analysis, along with hydrological and hydrogeological analyses, allow early detection of potential groundwater withdrawal effects to protect regional water and environmental resources. Dr. Listopad worked on this project for almost a decade to provide wetland ecological statistical analyses and reporting as a subcontractor to VHB. Dr. Listopad developed the initial database to house the ecological data, including the WAP data and wildlife occurrences by quadrat/wetland, and developed the queries and reports to automatically calculate and update wetland affinity scores, soil subsidence, and canopy cover (for forested sites) with the annual monitoring data. Dr. Listopad used her statistical expertise to analyze the ecological data and assist with the annual reporting preparation and overall review of the conclusions of potential changes and impact detection annually. Ecological analyses of wetland affinity scores, canopy cover and soil subsidence scores were led by Dr. Listopad and included BACI ANOVA, repeated measures analyses, and non-parametric trend analyses. Data from rim versus interior quadrats, control versus reference sites, and before versus after production initiated were available for analyses, which were particularly powerful for this wellfield were particularly powerful as the data for both sites within and outside of the potential impact areas were available before production was initiated. 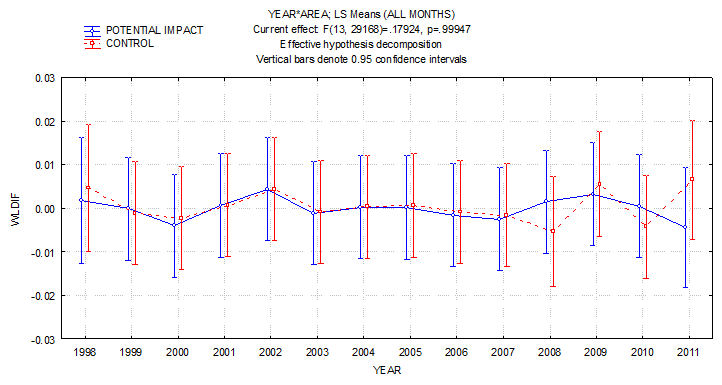